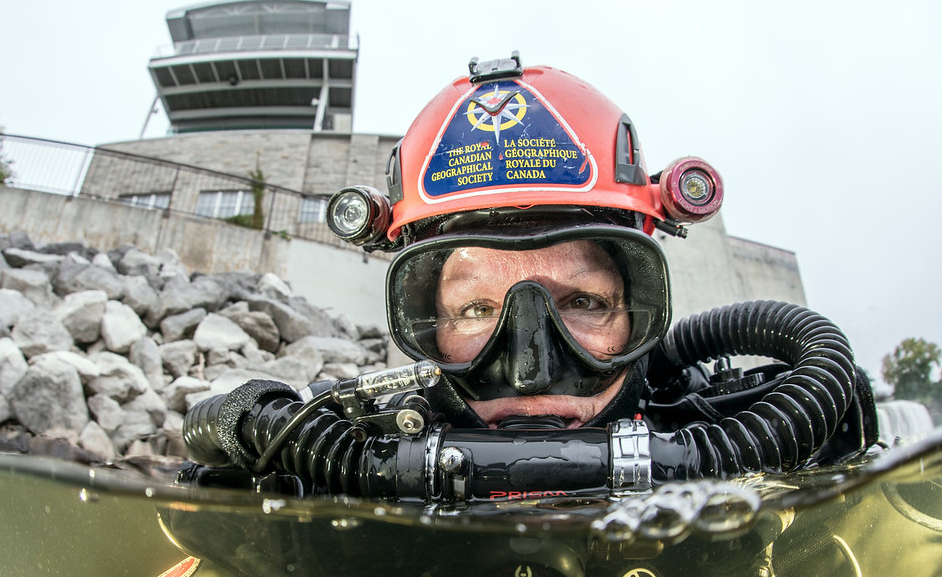 Accomplished author, global explorer and badass cave diver Jill Heinerth knows what it takes to be in shape for diving. She’s travelled the world leading expeditions, discovering new geomorphic features and cave systems, so she deeply understands what it takes to exhibit physical and mental discipline on a day-to-day basis.

Many of her extended dives—many of them groundbreaking—have been done using a rebreather. For the layman, a rebreather is “a breathing apparatus that absorbs the carbon dioxide of a user’s exhaled breath to permit the rebreathing of unused oxygen.” In short, it turns a short dive into a long dive.

We turned to Heinerth, who is a master rebreather technician and has used the devices countless times in the field to learn what it takes to safely get started. Along with her top safety recommendations for rebreather rookies, Heinerth also confessed that she learned some lessons the hard way early in her rebreather diving career.

Hey Jill, how did you get started using rebreathers?

My first exposure to rebreathers was in 1995-1996 as we planned ahead and trained for a major cave diving exploration and 3D mapping project at Wakulla Springs. … My husband, Paul, and I bought two rebreathers and six were purchased for training other members of the US Deep Caving Team. They all arrived in our Florida dive shop, which would serve as the home for training team members. It was exciting, tearing into the boxes.

Paul and I had literally spent our life savings to purchase two of these brand new rebreathers. There were no formal training programs for rebreather divers. We had to “figure it out” on our own and with the help of a few other people who were also diving early rebreathers. Other trainees came from around the world and stayed with us for months on end. Together, we developed skills and protocols and dug into the black box of the MK-5P so we were capable of fixing just about anything that went wrong.

We had some memorable experiments that I would not repeat. We induced hypoxia in the classroom in a somewhat controlled setting (don’t try this at home, we could have killed ourselves). While testing the burn time of hand-made lithium c-cell batteries, I experienced an explosion at 300-feet deep, inside a cave system. The battery exploded out of the brain box in the back of the rig. I completed the dive on manual control and by the time I finished all my deco, the battery was still fizzing in the open hole in the back of my rig. So, to make a long story short, I did not take a proper rebreather class when I got started. I taught CCR diving for more than a decade before I did a crossover class on another unit!

What are some top safety rules you have for rebreather use?

1. Know (and understand) the details

I think the most important thing to do is to start with the risk assessment more than anything else. Rebreathers require that you are dedicated to safety protocols and that you will be unwavering in applying those every time you go diving.

The first step is to ask yourself if you’re really prepared to dive in that way? Are you a little too freeform for checklists? Because it’s proven that the dedication to safety protocols is what’s needed to avoid incidents and accidents on rebreathers.

2. Have a one-step-at-a-time mentality

When it comes to the physical preparation, I think what’s important is, obviously, good diving skills, great buoyancy control, a great understanding of physics and physiology—and just a willingness to take it one step at a time.

It’s incredibly rewarding: the opportunities of diving  that’ll open themselves up to you once you have the extra tool of a rebreather in your pocket, as long as you’re willing to apply it thoughtfully, and from time to time, not do a dive if everything’s not right.

Those activities are just totally, totally incompatible with diving. Especially with rebreather diving. I mean, you’re gonna be rebreathing in the breathing loop potentially lethal levels of carbon monoxide if you smoked a cigarette and jumped on your rebreather after doing that. Your lung health just isn’t going to be in the place it should be for diving—and especially rebreather diving.

If you’ve just smoked a cigarette, and then you get onto your rebreather, researchers have done tests of carbon monoxide in the rebreather because you’re rebreathing the same gas over and over again and you’re off-gasing back into the loop. It’s horrifying—absolutely horrifying, what you’re putting your body through and the dangers that may be causing …To me, that’s a hard rule.

So yeah, I think good physical and mental health is really important—especially for rebreather diving.