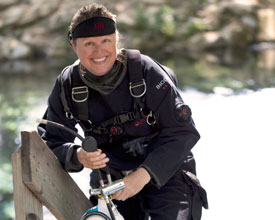 A pioneering underwater explorer and film maker, Jill Heinerth has dived deeper into caves than any woman in history. With a collection of magnificent images, from inside Antarctic icebergs to crystal underwater cathedrals, Jill shares a glimpse of a breathtaking world few will experience in person.

Jill’s photography and writing have been featured in prominent publications and major media outlets around the world. She regularly contributes to the development of training materials for international dive organizations, and is the author of three books on cave diving and underwater photography.

With her creative collaborator, the late Wes Skiles, Jill wrote, produced, and appeared in numerous underwater adventure films and television programs, including the award winning PBS documentary series “Water’s Journey.” She has been called upon by Hollywood producers as a diving technical consultant and camera operator and produces independent film projects through her company Heinerth Productions Inc.

Jill Heinerth’s accolades include induction to the inaugural class of the Women Diver’s Hall of Fame, being named Canadian Technical Diver of the Year and being recognized as a Fellow of the National Speleological Society and Explorer’s Club. Recognizing a lifetime devoted to water advocacy, Jill was recently awarded the Sea Hero of the Year Award by Scuba Diving Magazine. In 2011 she received the Wyland Icon Award recognizing her passion for protecting the underwater world. She shares that honor with past recipients including Dr. Sylvia Earle, Robert Ballard and Rachel Carson. Jill’s formal education includes a degree in Fine Arts in Visual Communications and Design, and she has successfully combined her love for the underwater world with her artistic talent, leading to scores of photography and filmmaking awards.

Jill’s life passion is educating the public about fresh water issues. She brings her unique perspective from deep inside the earth, helping us understand that our activities on the surface affect not only our drinking water, but also the health of rivers, lakes and ultimately the world’s oceans. Teaching people about their interconnectivity with the natural world, Jill’s current project, titled “We Are Water” combines documentary filmmaking, live presentations and social media.

Aron started diving in 2005 and has never looked back. His passion for technical diving has taken him to some of the best diving locations and expeditions in the world.
He has written articles for dive publications, developed products and regularly helped organizations developing training outlines. Aron also filmed documentaries and commercials along with hosting numerous TV and Film productions including National Geographic ́s One Strange Rock, Dive Odyssey, and Monty Halls.
Aron is one of the Co-founders of Team Blue Immersion, one of the most renowned technical diving facilities in the world, which he operated with Jonas Samuelsson and Erik Brown from 2010-2016 teaching up to Advanced Trimix, CCR, Gas Blending, Full Face masks and support diving in the technical diving mecca of the world, Dahab. Aron was responsible for safety for dives on CCR, OC, and freediving up to 200m. Aron is also very interested in research diving, participating in projects with various organizations all over the world. He also conducts public speaking lectures on how to become an explorer for children.
One of Aron’s personal highlights was a four-year project where, in 2011 and 2013, Team Blue Immersion discovered the wreck USCGC Alexander Hamilton at 95m, 20 miles off the coast of Reykjavik. The team initially conducted a deep exploration dive and subsequently, after communicating with the US Coast Guard and the families of the fallen men, attached a memorial plaque on the ship for the families of the fallen soldiers.
Recently Aron spent a year living on a boat in Truk Lagoon and Bikini Atoll, which has put his focus in his dive career currently on wreck diving, planning to do wreck expeditions all over the world with his brand The Dirty Dozen, where he does bespoke CCR itineraries to some of the most remote diving destinations on the planet www.thedirtydozen.org.
We are excited to have Aron as a Hollis Rebreather ambassador and look forward to sharing more of his adventures on the Prism 2
Hollis Rebreathers © 2021