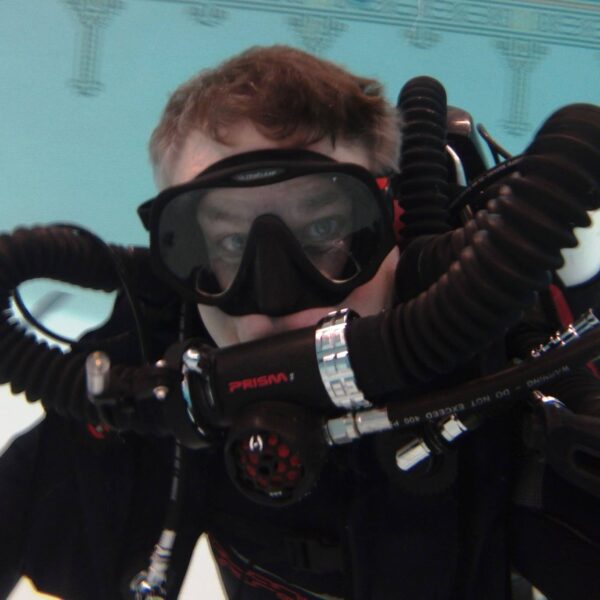 In 1988, Rich Synowiec began his career in the diving industry. Needing a summer job, he began work as a stock boy for Michigan Underwater School of Diving. Over the next year, Rich discovered that he had a knack for selling and built his understanding of the Diving Industry. In 1990, Rich took his Instructor Development course from Richard Roost, the founder of Divers Incorporated. He taught PADI courses through that year and in the fall of 1991, Rich was promoted to store manager and continued in that position for another three years, training new divers and leading travel expeditions around the world.

In 1993, Rich left MUSD to focus his time on college, continuing to teach scuba independently and working part time for Gilboa Stone Quarry as a diving supervisor on the weekends. Shortly after graduating from College with a BA in Management and Organizational Development, Rich was asked to help with the startup of Great Lakes Technical Diving. He became manager and instructor and was one of the first instructors in the area to bring NITROX and Technical Diving into the mainstream. While at GLTD, Rich became one of the areas first technical diving instructors, and as one of the innovators in technical diving education in southeast Michigan had teaching and speaking engagements around the country. In the spring of 1996, Rich started working at Divers Incorporated as a store manager and instructor.

In the fall of 1997, realizing that the scuba industry as a whole had needs that were not going to be solved while he was working for someone else, he stepped down as manager to part-time at Divers Inc, and became a manager trainee in the Retail Jewelry Industry. While he continued teaching scuba, Rich focused on learning how businesses needed to adapt and change to continue to grow. Rich received numerous promotions and has been a manager of many jewelry stores across the mid-west.

In 2001, Rich took a position in business to business sales allowing him more time to develop the plan to start his own scuba/ aquarium business. He was teaching scuba in Brighton when the idea of purchasing Divers Incorporated came to him in a conversation. The purchase of Divers Incorporated in 2004 has been the culmination of a lifetime of dreams and the promise of more to come.

Since 2004 Rich has continued to grow as an instructor and as a leader in diving. Rich became one of the leading trainers of Public Safety Divers in Southeast Michigan. He is one of the areas only PADI TecTrimix instructors actively exploring the extremes of our planet. In 2010, Rich launched DiverSync -Netcasts and Podcasts for Scuba Divers to give back to the community by voicing opinions, concerns and an interactive diving experience to water enthusiasts around the world.

Not being content with the status quo in 2016 Rich earned the distinction of becoming a PADI Course Director and Trimix Instructor trainer. Later that year he also became a PADI Prism 2 Rebreather instructor. Entering a whole new realm of offerings for diving adventures.

Rich primarily dives and trains in the Great Lakes and surrounding waters. He is able to teach in any environment including cold water, drysuit diving and even ice diving. His Prism2 courses primarily are done in cold water environments but he does offer them in tropical locations as well.

Rich spends much of his time on his business and when he can, his wife, Jill and twin daughters Natalie and Olivia. While he has been in the business nearly 30 years, been diving for nearly 40 years, on his days off he still goes diving.